Georgina Bartlett graduated with a Master of Architecture from Queensland University of Technology in 2014, with a second major in Interior Design. She worked for the major architectural practice SPPARC in London from 2016 to 2019 where she worked on retail, commercial and multi-residential projects as well as large scale urban master plans.

Georgina joined Blight Rayner in 2020 on returning from London and is in the process of applying for architectural registration having had extensive graduate experience. Georgina worked extensively on the Hassall Street development in Parramatta, combining the Western Sydney University Engineering Innovation Hub with commercial offices. Georgina is currently working on two large houses in Brisbane, and on The Greenhouse office building at West Village. 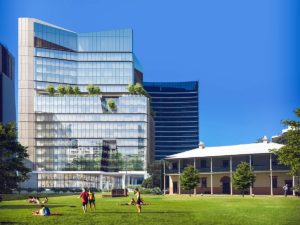 I believe that the act of designing entails both learnt knowledge and intuitive creativity, each informing the other. I have a particular interest in cultural heritage, and in linking the past with the future through sensitive, bespoke design solutions.