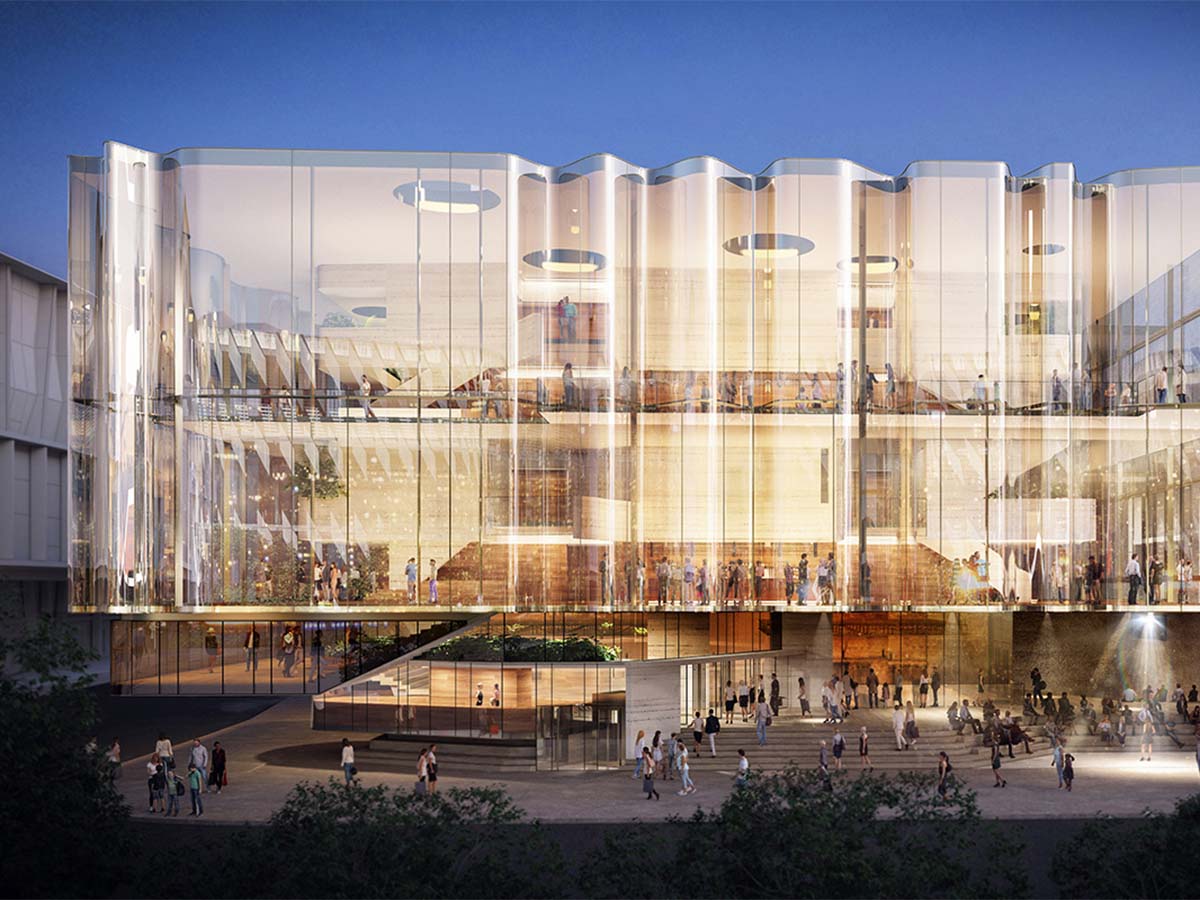 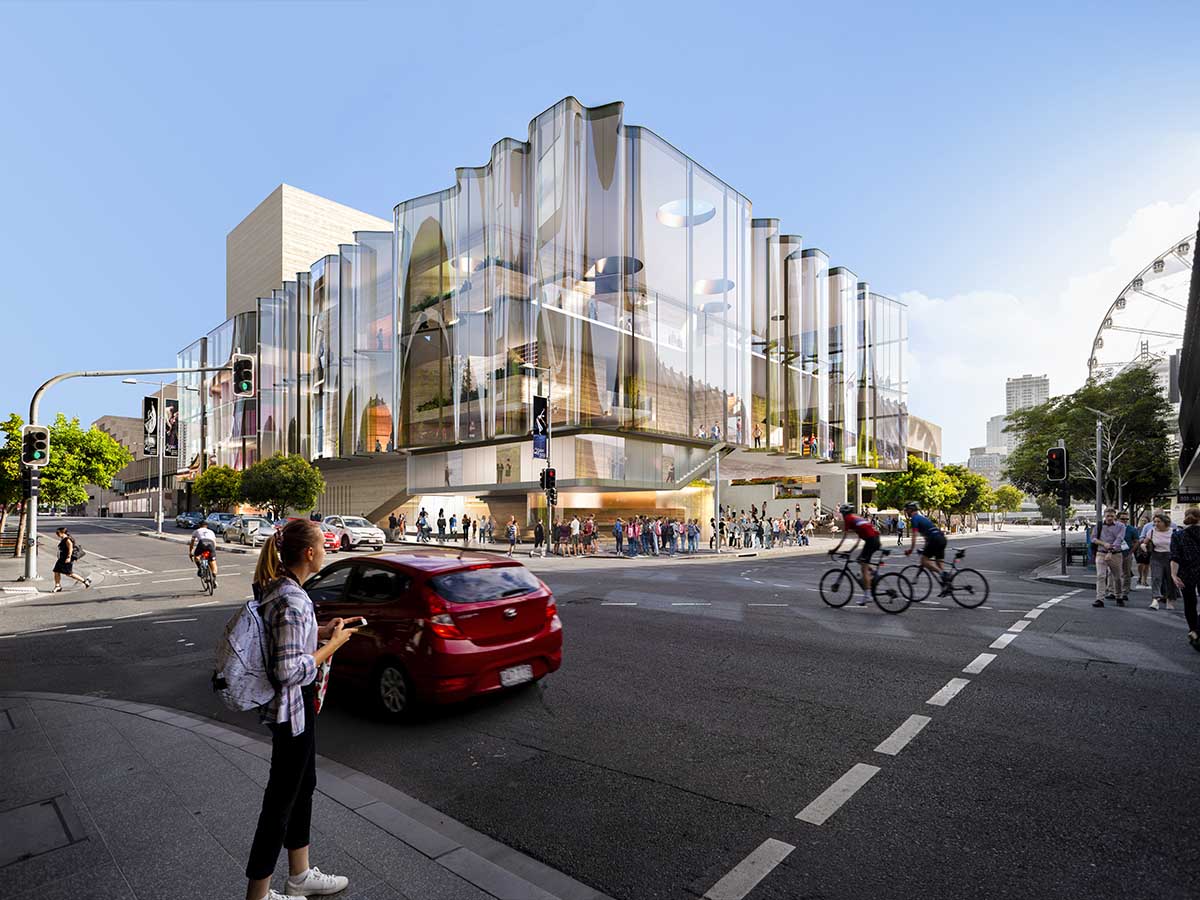 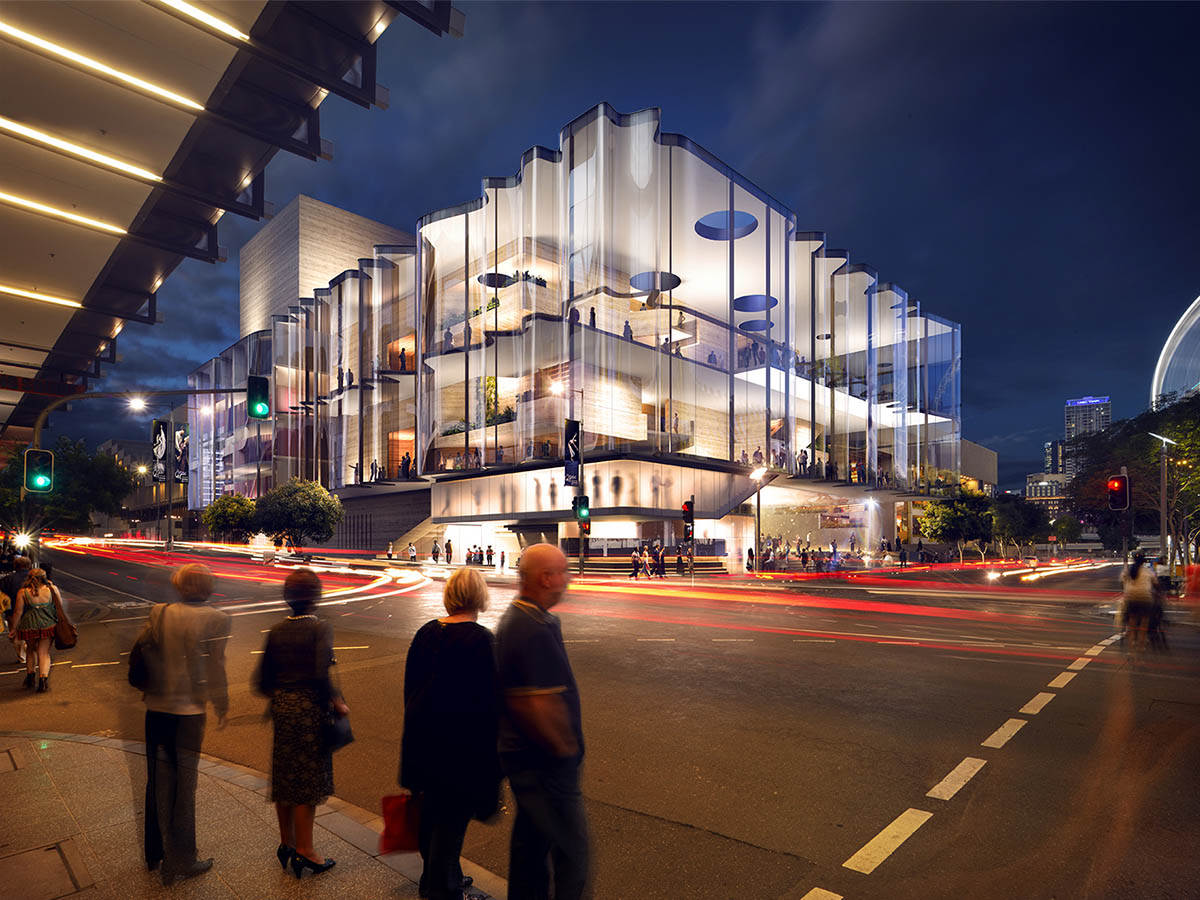 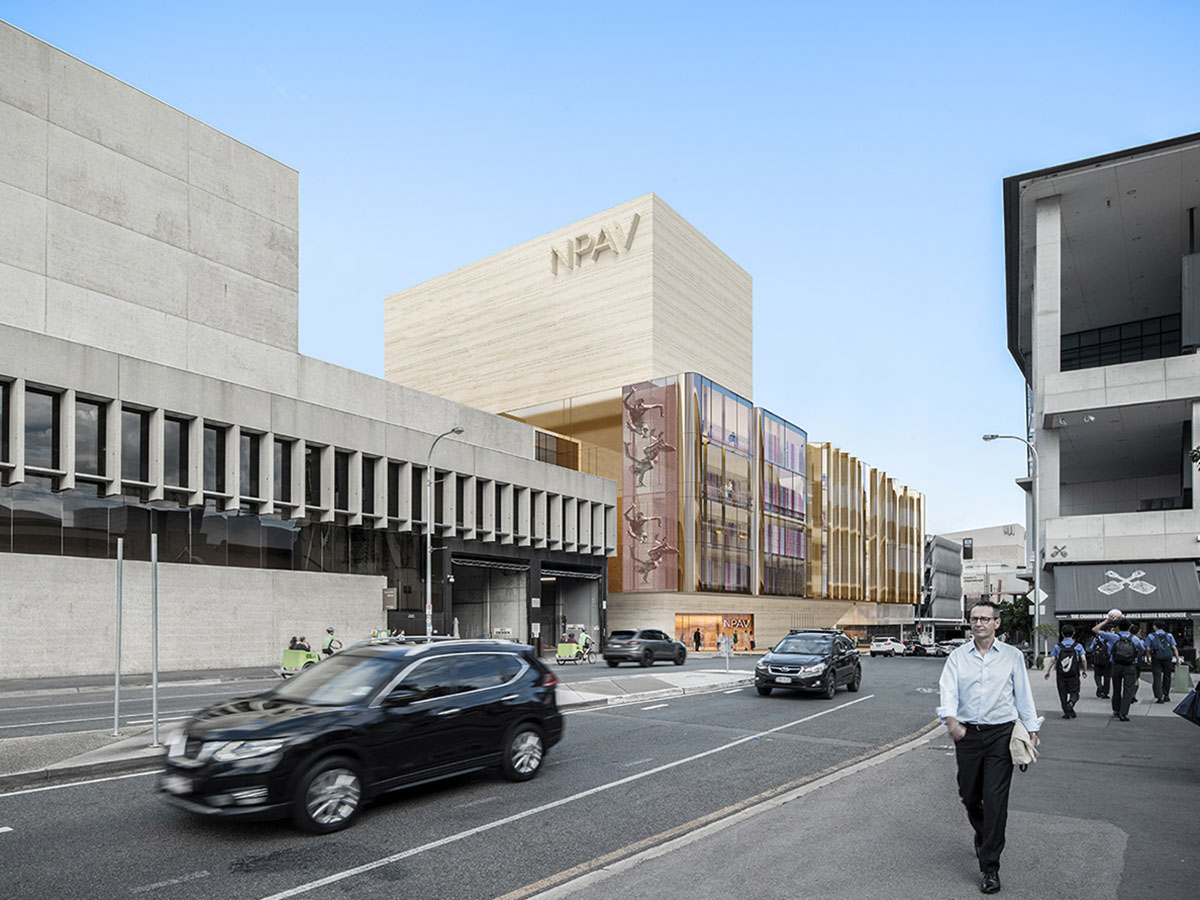 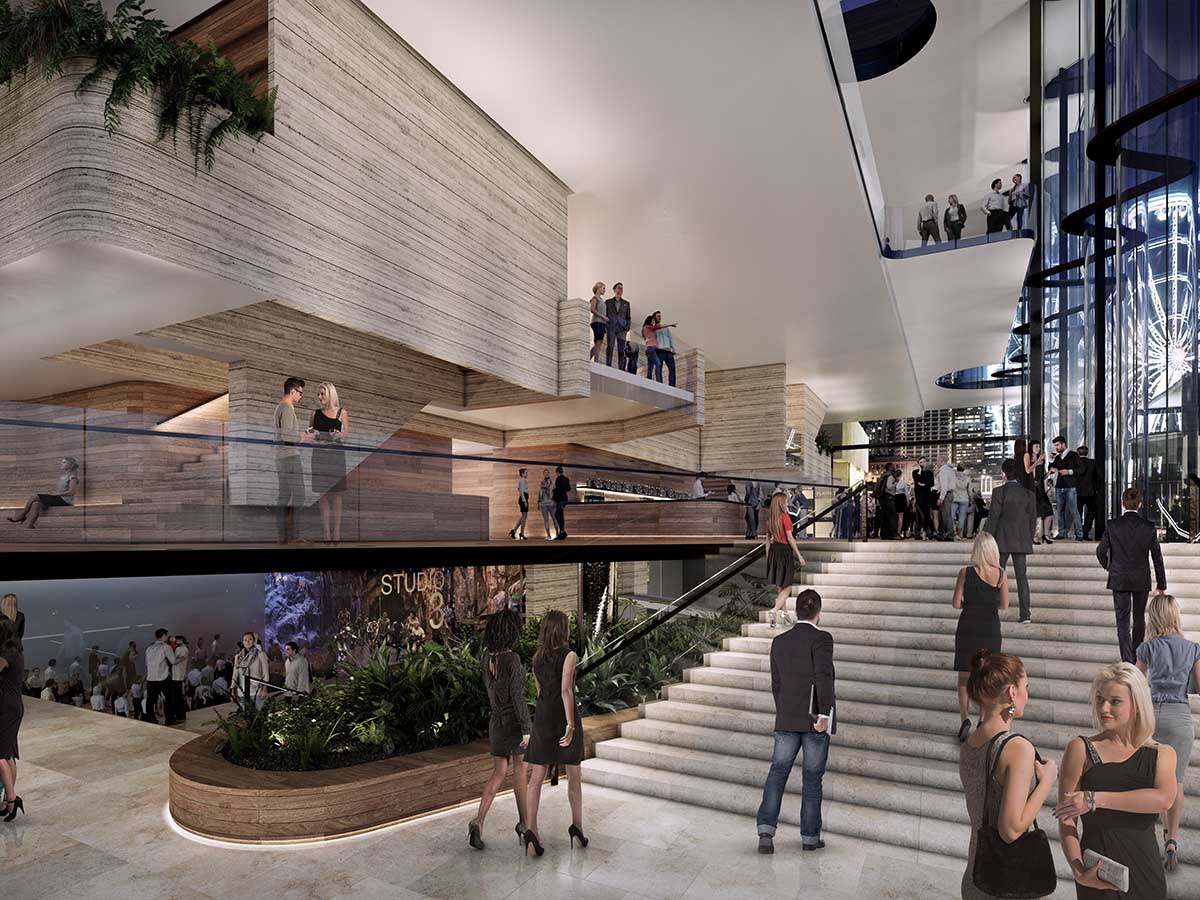 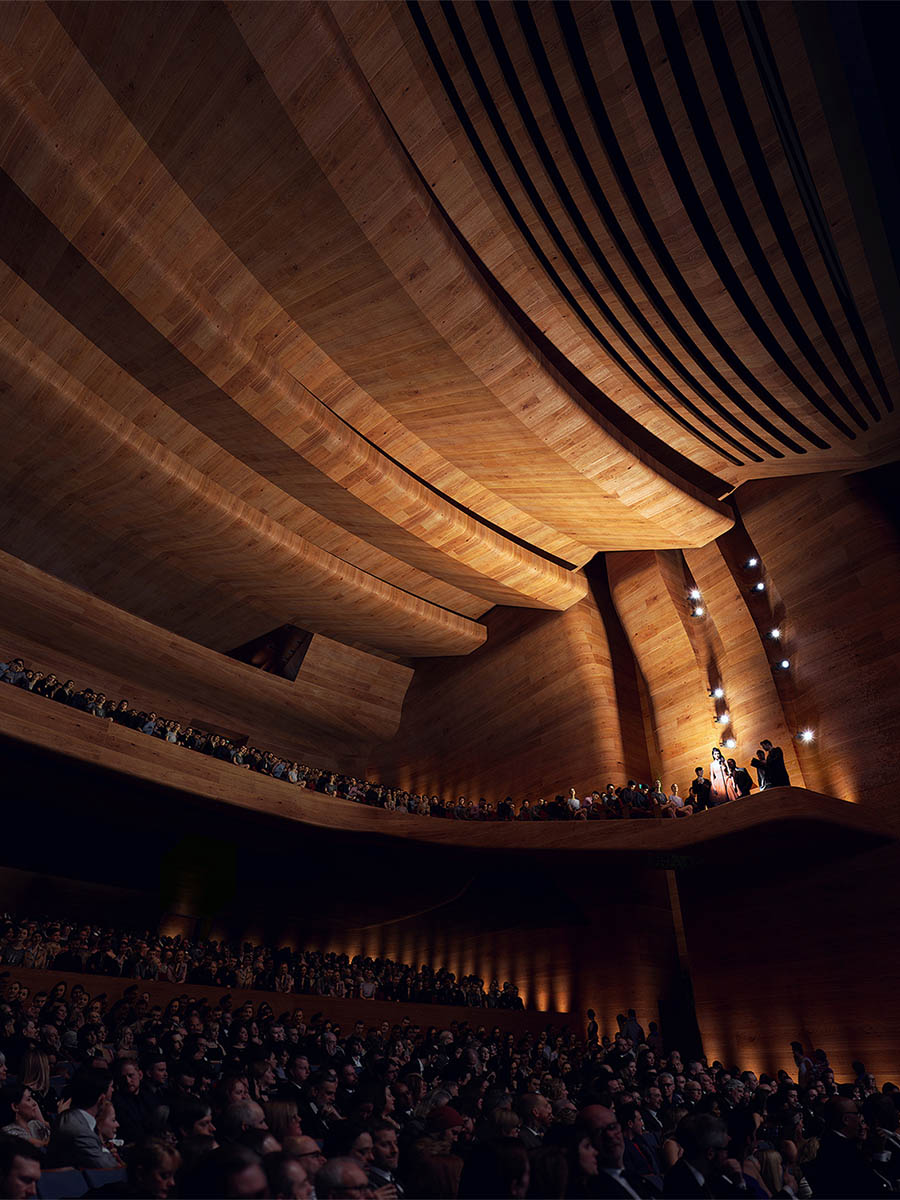 We are very excited to have won the architectural competition for the New Performing Arts Venue project which teamed local architects with internationals like Amanda Levete Architects, Henning Larsen, and Kerry Hill Architects.

We partnered with Snøhetta because of their brilliant cultural building in Oslo (Norwegian National Opera and Ballet), Egypt, New York, their theatre expertise, and their work on the Arts Centre Melbourne involving the modernist heritage architecture of Roy Grounds. When one of the creative directors of the 2012 AIA National Conference in Brisbane, Michael Rayner invited Kjetil Thorsen to speak and maintained contact over the years out of interest in Snøhetta’s work.

Our design responds to a vast range of criteria set by the brief, but its form and spaces especially to some priority considerations – how to embed the spirit of and honour First Nations Peoples, how to respect the heritage-listed architecture of Robin Gibson, and how to engage the performing arts with public life of the city.

A poem by Aunty Lilla Watson, an Indigenous Australian artist we know, stimulated our process:

Beneath the Southern Cross,

and the canopy of the rainforest along the river bank,

the Kurilpa, which still survives here,

dug out its nests and left its tracks…

they looked out over the river,

the ripples on the surface

stirred by the wind and tidal surge,

and the fish swimming in the water.

The external expression responds to this, as well as to notions of dance, music, a curtain and a narrative. We also wanted to make it highly transparent, rather than mimic the solidity of Robin Gibson’s fabric, to amplify the sense of accessibility.

Our respect for the existing architecture is expressed in many ways – the adoption of cubic forms, retention of existing fabric, continuation of the established grid and spatial hierarchies, and a minimal palette of materials among them.

A major initiative was to incorporate rehearsal/performance studios on both street frontages such that they are visible to passers-by, part of our approach to engaging artistic activity within the public realm.

We are now commissioned with Snøhetta for the project to its budget of $125 million and completion at the end of 2022.

In addition to the above, other key team members of the competition team were: