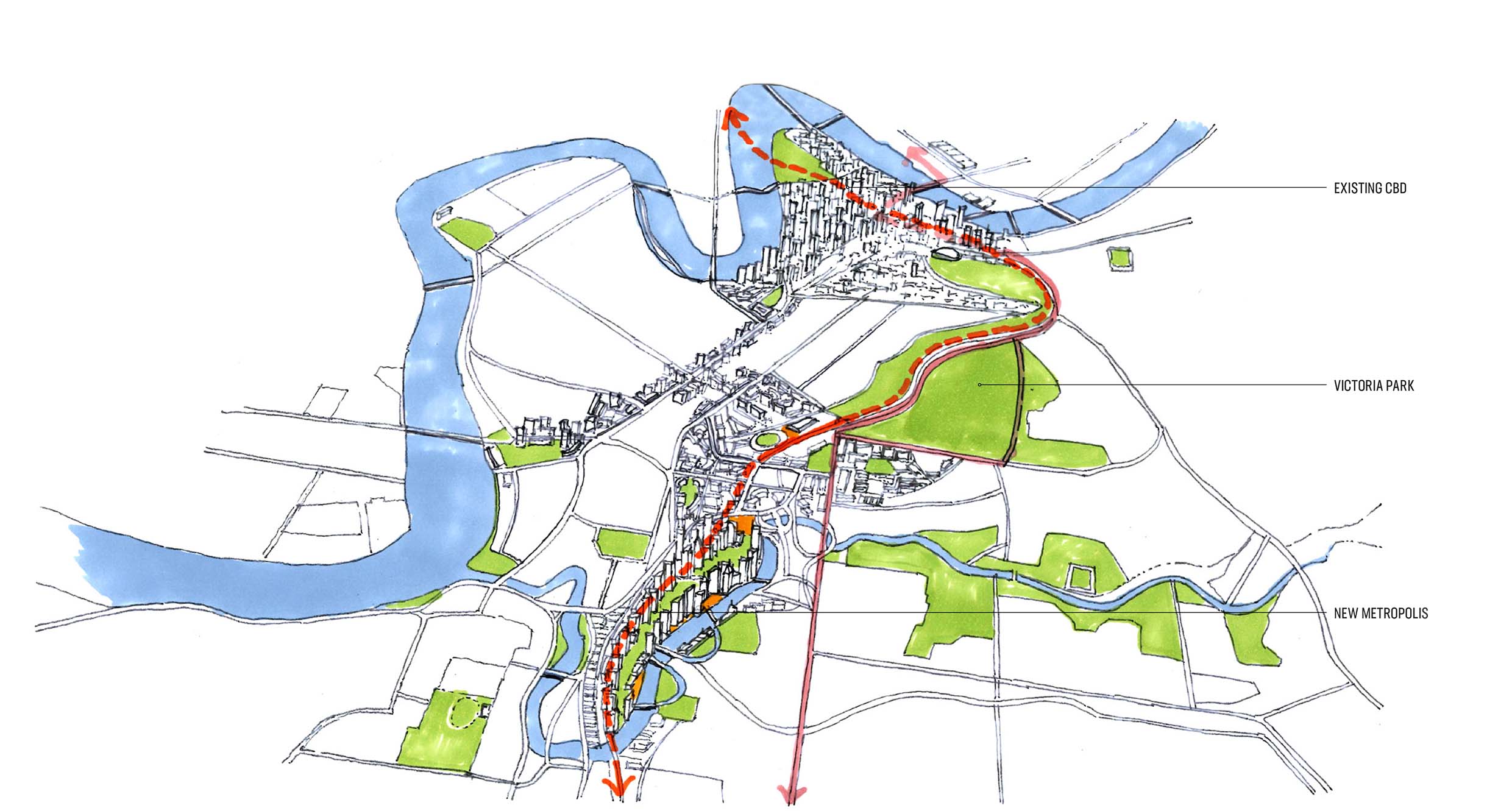 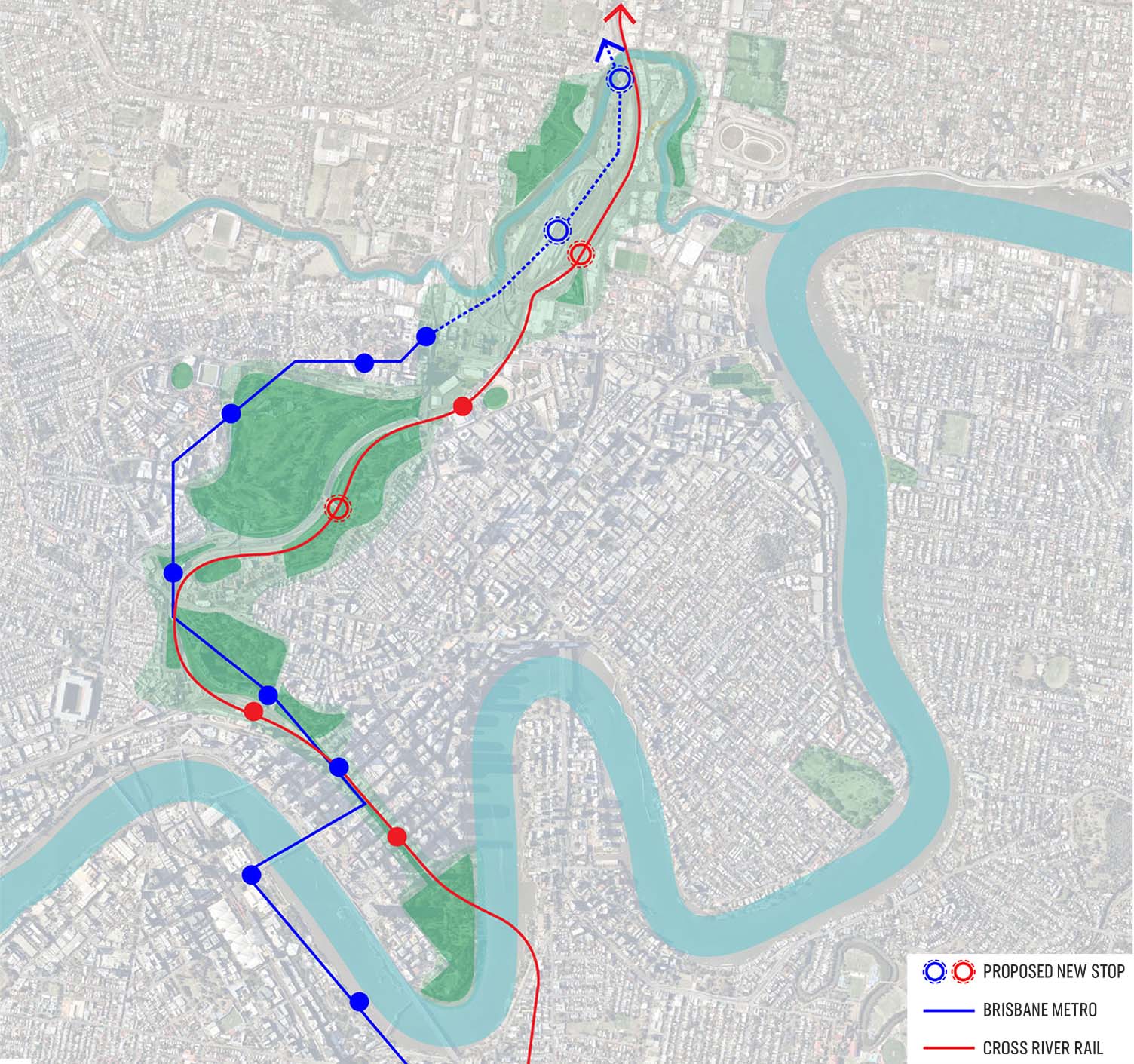 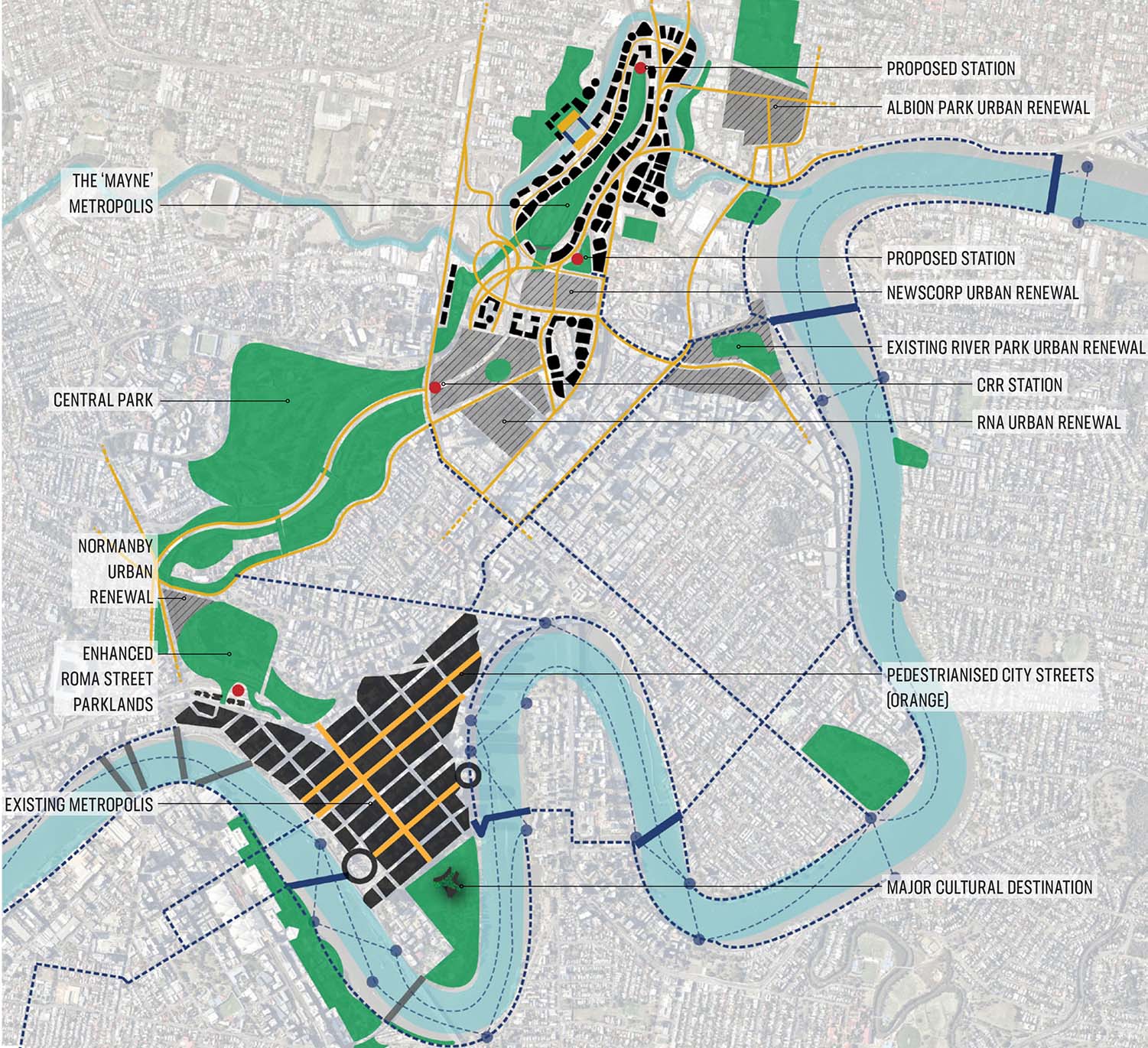 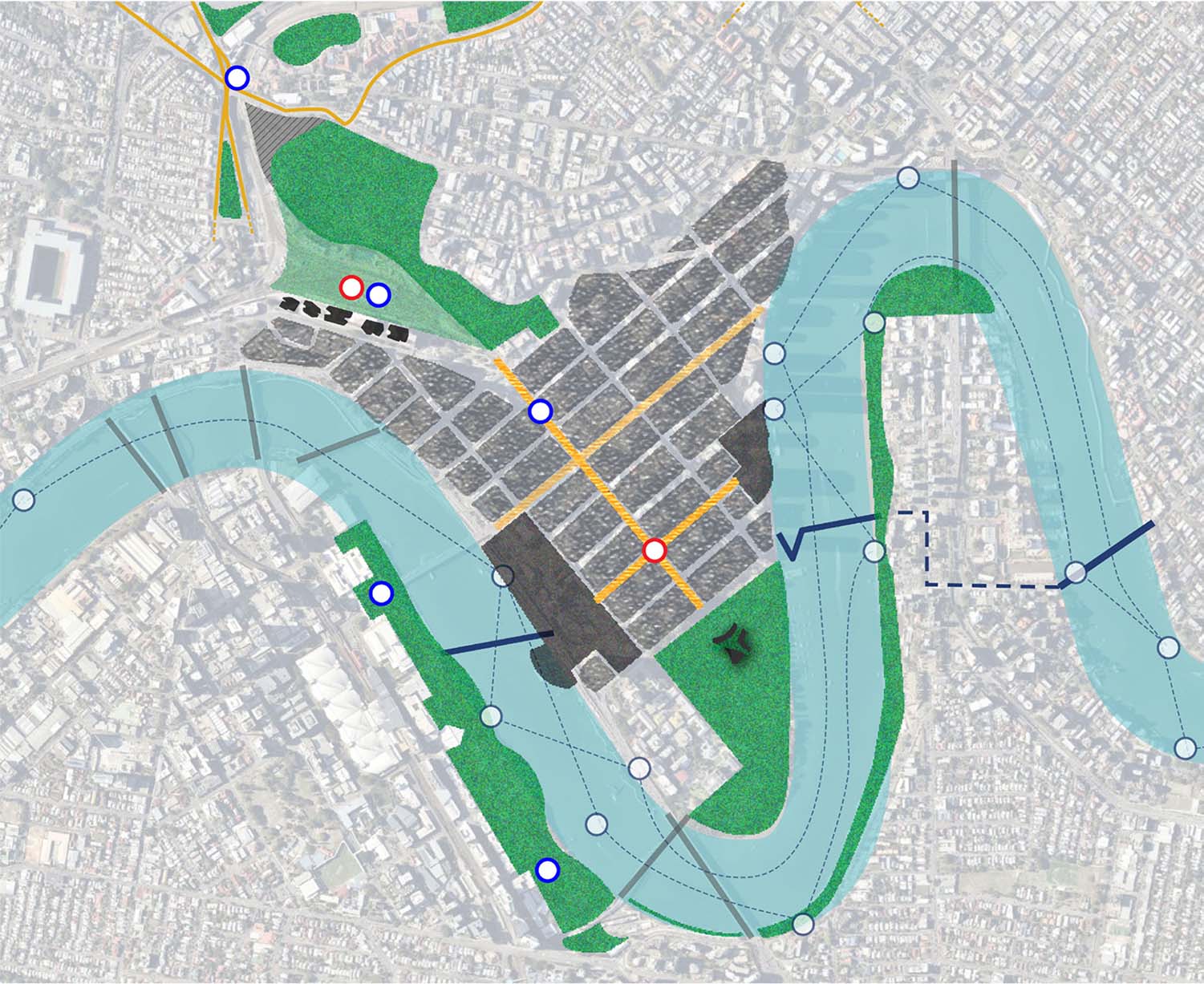 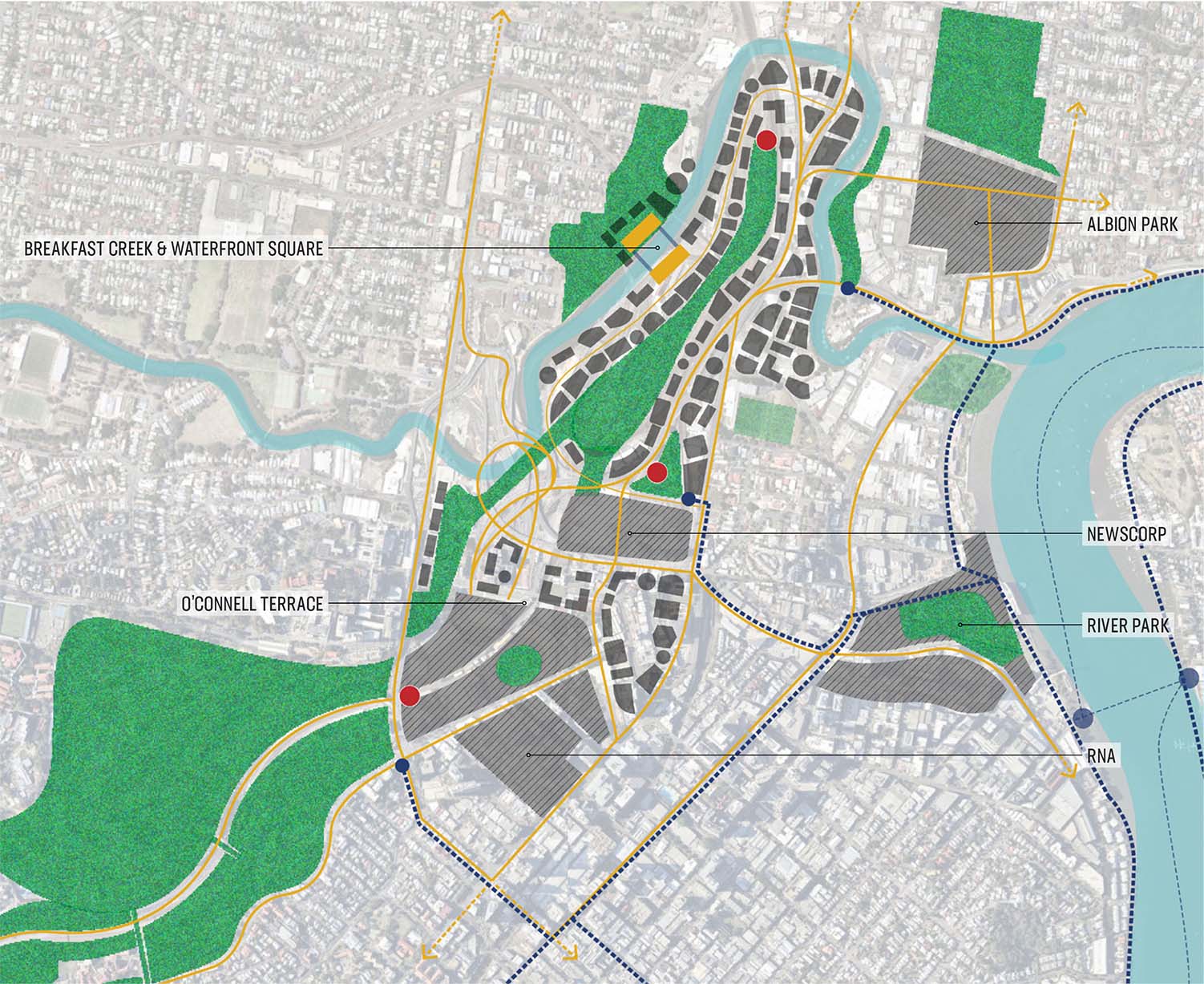 This strategy picks up on the 2007 Rethinking the City Centre strategy, noting that some of its recommendations have since been adopted, such as the CBD-Kangaroo Point pedestrian bridge.
The strategy proposed continuous parkland from Bowen Hills north of the CBD through to Botanic Gardens at the southern end of the CBD. This 4.5 kilometre green spine is intended to match the prowess of the Brisbane River as defining corridors of the Brisbane city centre. Some ingredients are already in place, such as Roma Street Parkland, but have never been linked with their wider context. The currently activated project by Brisbane City Council to convert Victoria Park to public parkland is a major catalyst for this wider concept.

The proposed includes full pedestrianisation of the CBD’s Albert Street, CBD connections into Roma Street Parklands and through to Victoria Park, and a new linear park through the Mayne Railyards envisaged as a second urban metropolis for Brisbane. This is a prime opportunity to create a sustainable city precinct almost as large as the existing CBD, powered by solar, hydrogen and wind energy, accessed and interconnected by fast light transit, and invigorated by continuous frontage to the city’s undervalued Breakfast Creek.

The concept includes developing a series of new landmark attractions along the corridor, the most dynamic being a partially underground Museum of Natural History and Sciences in the heart of the Botanic Gardens. This will overcome the present space constraint of the existing Queensland Museum and place a significant destination, attraction, and place of research in what are otherwise much loved but underwhelming botanic gardens. Another element proposed in a new Brisbane entertainment centre (often referred to as ‘Brisbane Live’) which would activate the Victoria Park close to one of the new Cross River Rail stations.

The strategy will provide a total of 170 hectares of interconnected inner city parkland and set Brisbane up as the great subtropical city it should be world-renowned as.